Where Do You Want To Go To Die? 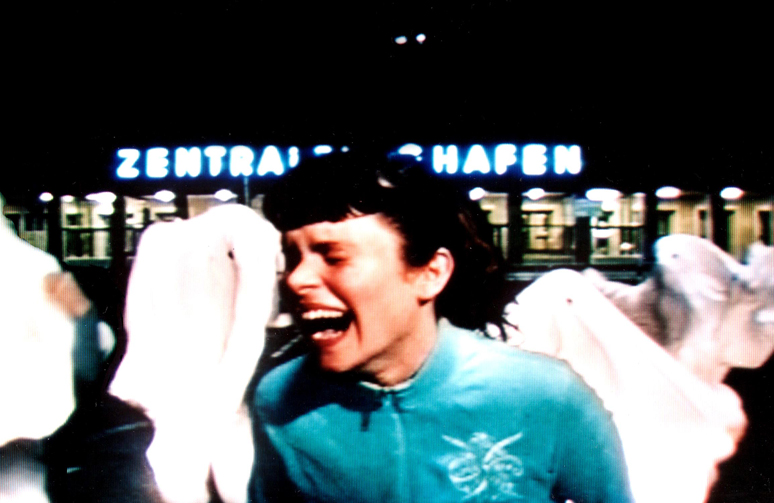 Where Do You Want To Go To Die?

Where: a mini-bus, with video projected onto the windscreen.
Who: 7 passengers
How Long: 53 minute loop
A video projection shows a nightime journey around Berlin from the
point of view of the front windscreen of a van.
Each of 8 episodes starts from darkness with just the chattering voices of seven people on a journey.
The image of a speeding road appears and out of the banal atmosphere the van pulls up. A passenger appears in the glare of the headlights, and performs a parting gesture till they are abandoned and become a fading image.

by Tatjana Turanskyj
To write about “the authentic” in relation to Gob Squad, would surely be interesting, because that was a term often used on premieres, although fortunately, nobody knows what “the authentic” actually is.
But it is something – incomprehensible to me – that moves people and I just want to note that the apparent lack of separation between the private and the public, between friendship and work, life and show, probably contributed to the linking of Gob Squad with this term.
But of course that is rubbish and doesn’t describe it at all. The opposite is the case. The best work of Gob Squad is in the realm of the surface.
I would even say that they work continually at the surface; the surface – that is the image – is their subject.  The fact that it is the desire for beauty, for sugar, and the resulting great happiness which propels them, to give this desire an expression, perhaps. Their shows are full of images of longing. They are longing-workers. Romantics and fighters for what I, because I am so kitsch, call for short, “the wonderful world”.
In the video installation Where do you want to go to die? you could learn how to die with Gob Squad. Like nearly all their performances, this video installation too is a test apparatus. Topic: the celebration of nightlife.  One disco after another. The condition between the parties. The way there. The excitement. Driving together through the city. The expectation  – always better than the party. In the installation the group drives in a car, apparently “in private”, through the streets. They drink, they talk. They address each other with their real names, etc.
A recurring style element and perhaps one of their best secrets is this knowledge: we are here and you are not with us, although we know that you would now like to be.
After the first short journey, the first performer steps out of the car, in the place in which he or she has selected to die, or better, where the ultimate performance takes place. We see their concept of the end performed to us. The end is here, the exit from the collective, the distance in space from the others. But through this visual change of perspective, something else takes place as well: we spectators also see the person who will soon die. That makes us finally a part of the group and one is very happy for one moment. Perhaps this moment in which one is allowed to take a place is the most beautiful moment in this installation. The shift of viewpoint, or just the reference at all to the fact that everything is only a question of viewpoint. Or that everything always can and will be different. Those are the moments of hope and happiness. I could enumerate many moments of happiness like this one because too, Gob Squad are always producers of happiness. What they always do, they always say YES. Perhaps it is this oblivious, stubborn YES that agitates one and makes one happy.
Each of the performers dies in their individual way.
Berit Stumpf pours flour in her hair for example, and headbangs. Some 80s hit accompanies. After her performance the car drives on as if nothing had happened and leaves a small white ghost ready to live on in limbo.
And so it goes on, until all the performers of the group die at a place of their choosing. Simon Will dies glamorously at a petrol station, pouring champagne over his head, Sarah Thom sprays a kind of liquid foam stuff on her naked body and transforms slowly into rigid angel. Sean Patten simply disappears, dancing into the nothing of a clearing.
You are almost a bit annoyed because it is all so simple. But it isn’t – Gob Squad celebrate the longing. Since the longing must remain unfulfilled, this sadness always surfaces in their work. Under the mirror-smooth surface of a successful Gob Squad Show, sadness always lurks. And this sadness is the real moment in Gob Squad work. It is a bittersweet sadness. Perhaps wistfulness is the more suitable word.
After another journey through the city, Liane Sommers is the last to get out of the car. The car stops, she stands before it and looks at us all through the windshield. A blurred picture develops, because water squirts onto the pane, the windshield wipers start. She doesn’t do anything, she just looks at us. Then you suddenly see she is crying.
This is an excerpt from:
The Making of a Memory: 10 years of Gob Squad remembered in words and pictures
Synwolt Verlag, Berlin 2005, ISBN 3-937065-06-7
This website uses cookies to improve your experience. We'll assume you're ok with this, but you can opt-out if you wish.
Cookie settings
ACCEPT
Privacy & Cookies Policy