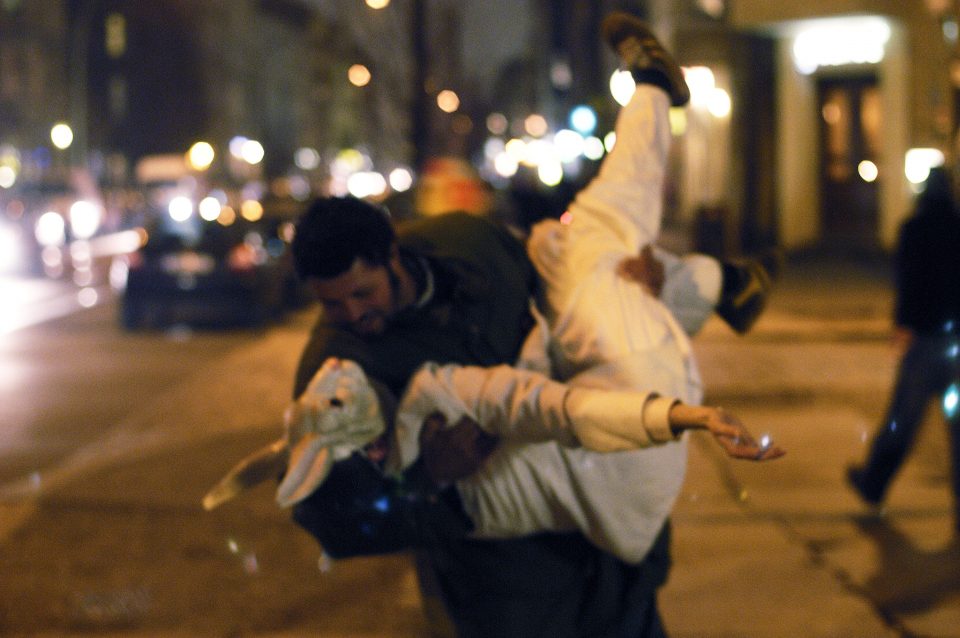 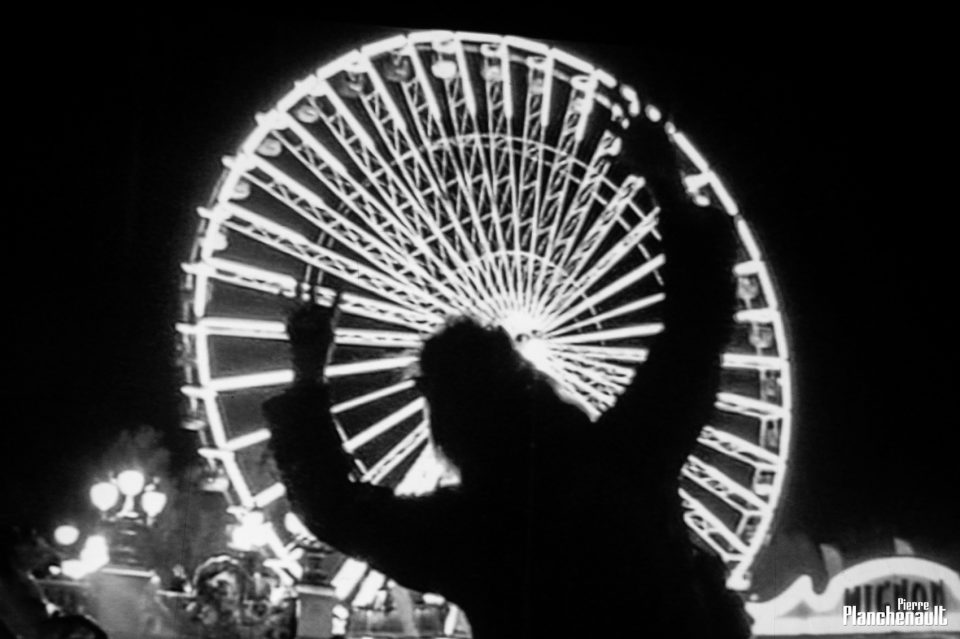 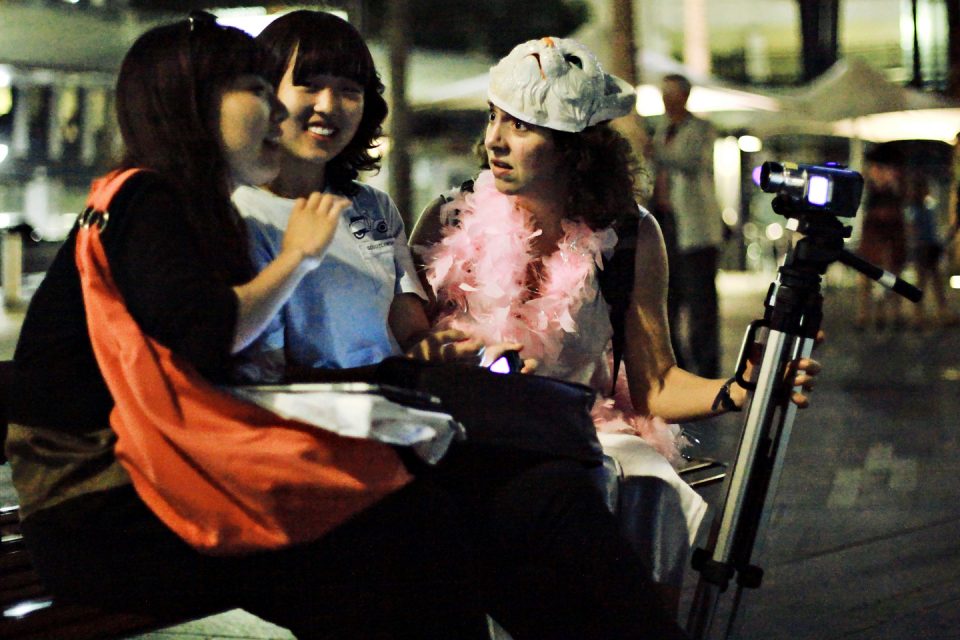 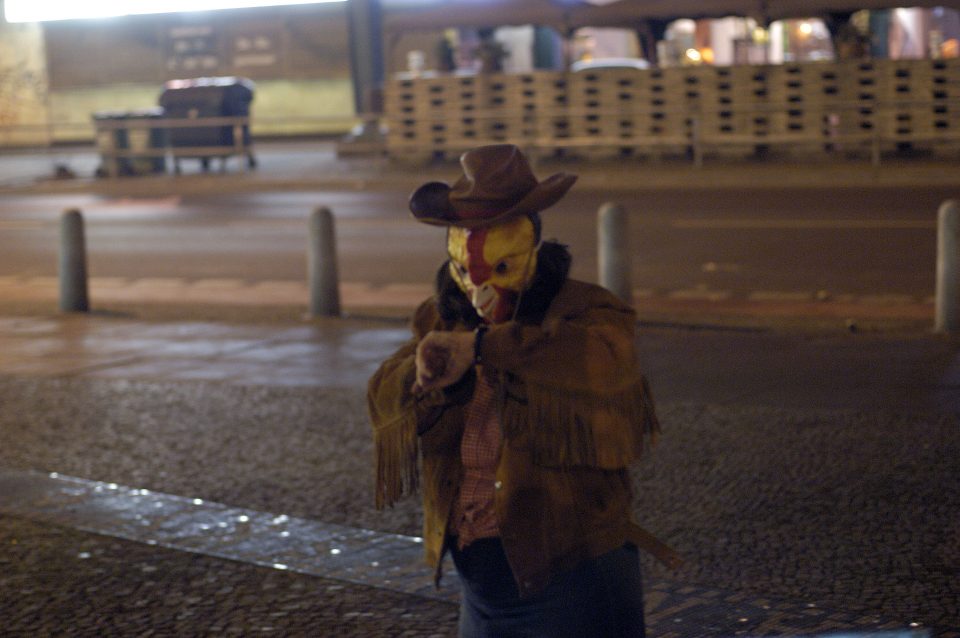 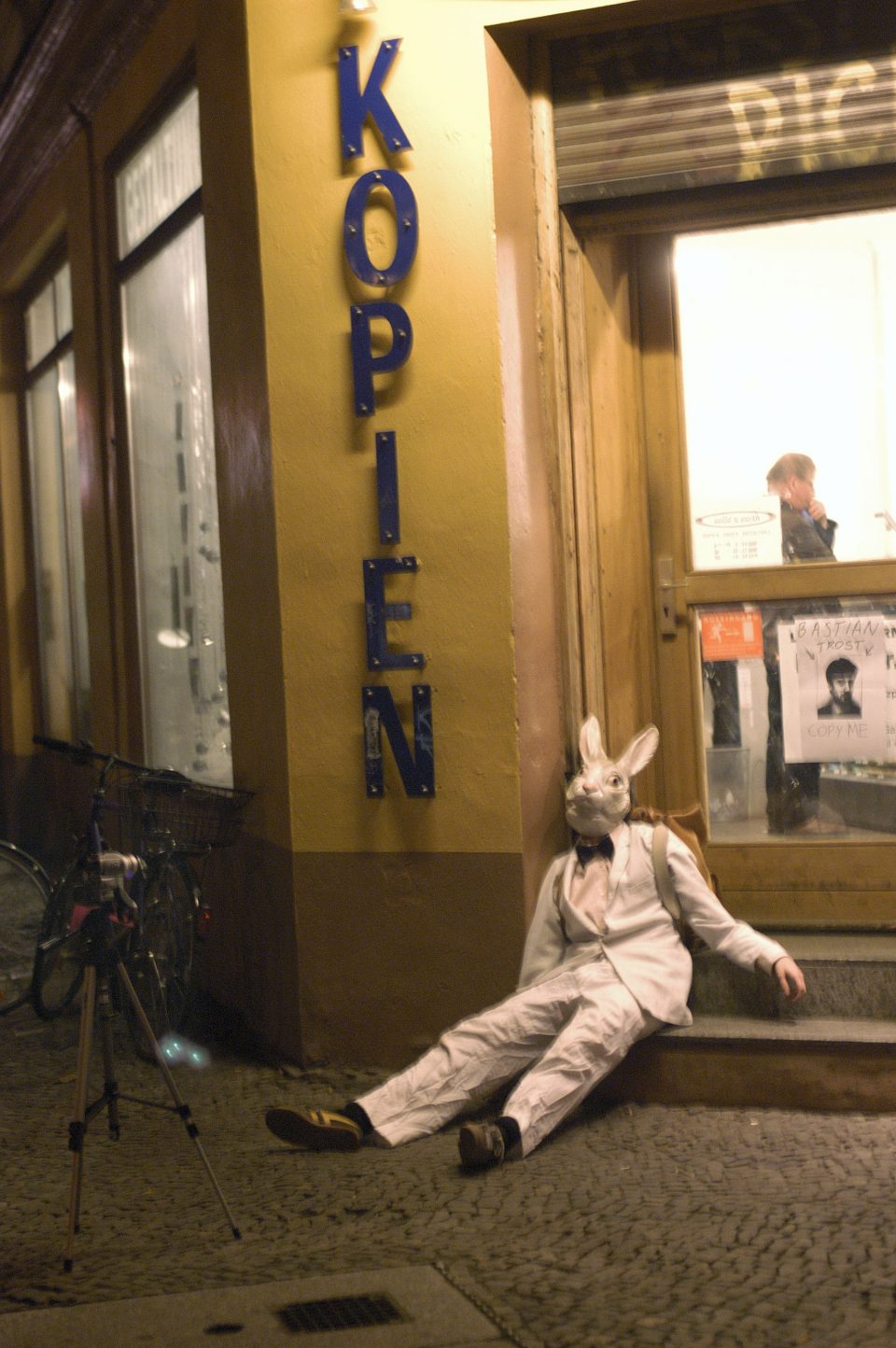 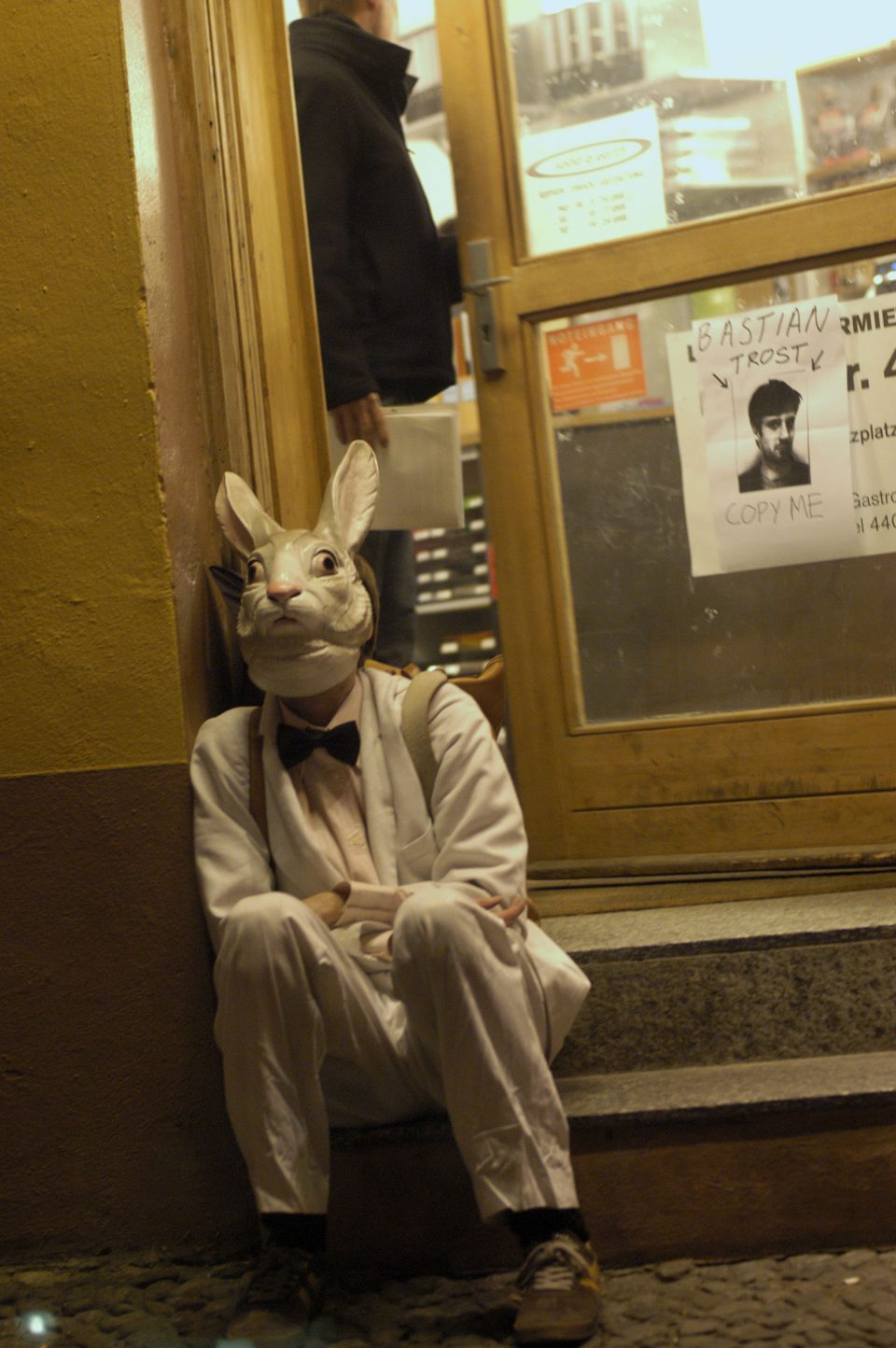 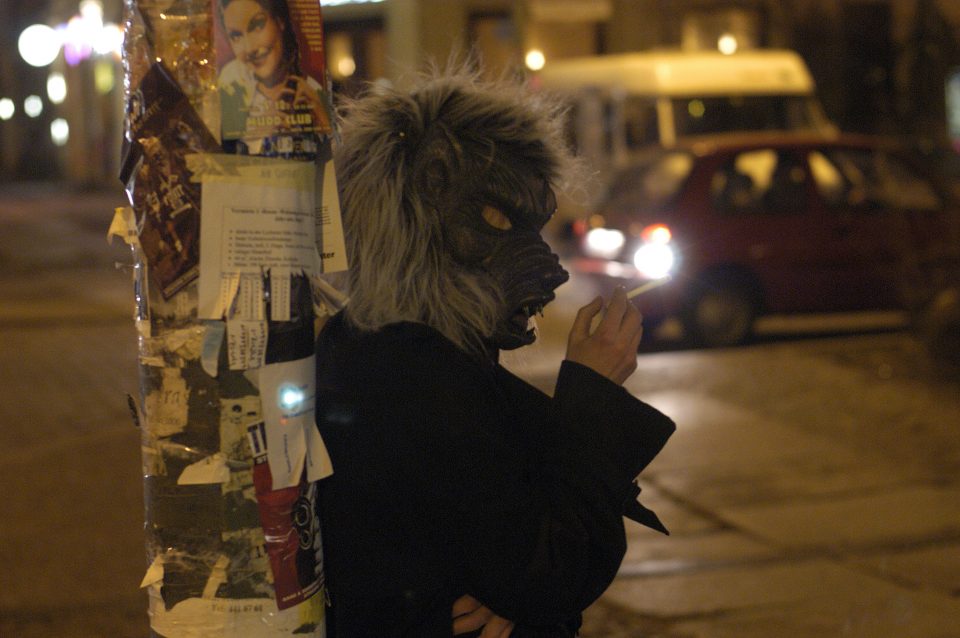 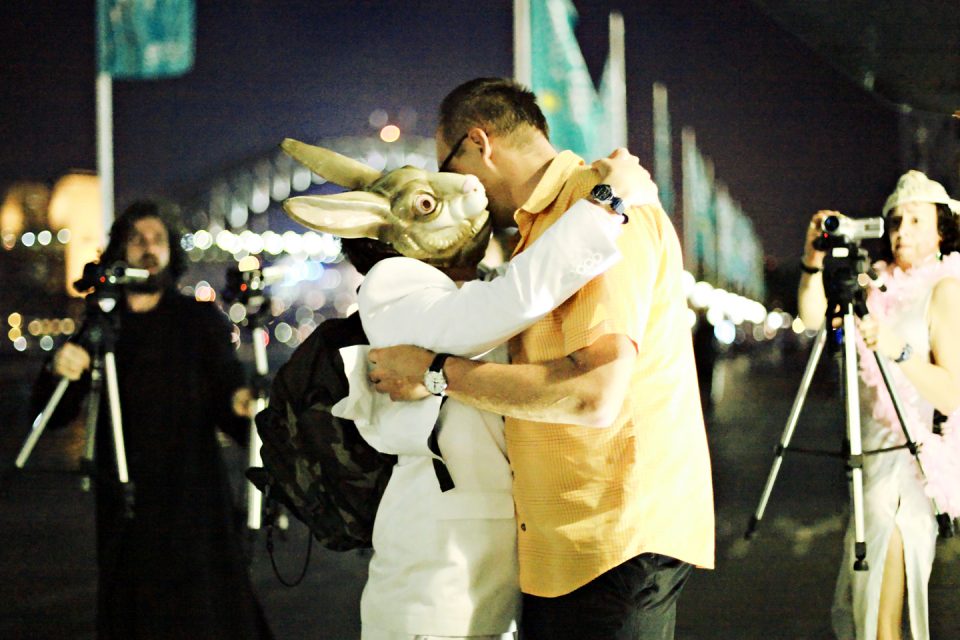 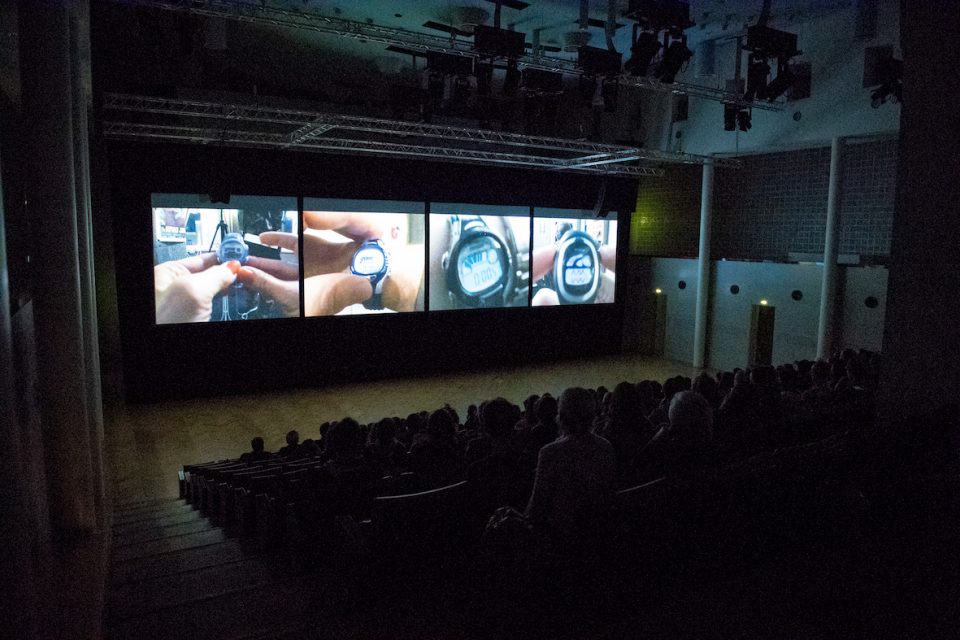 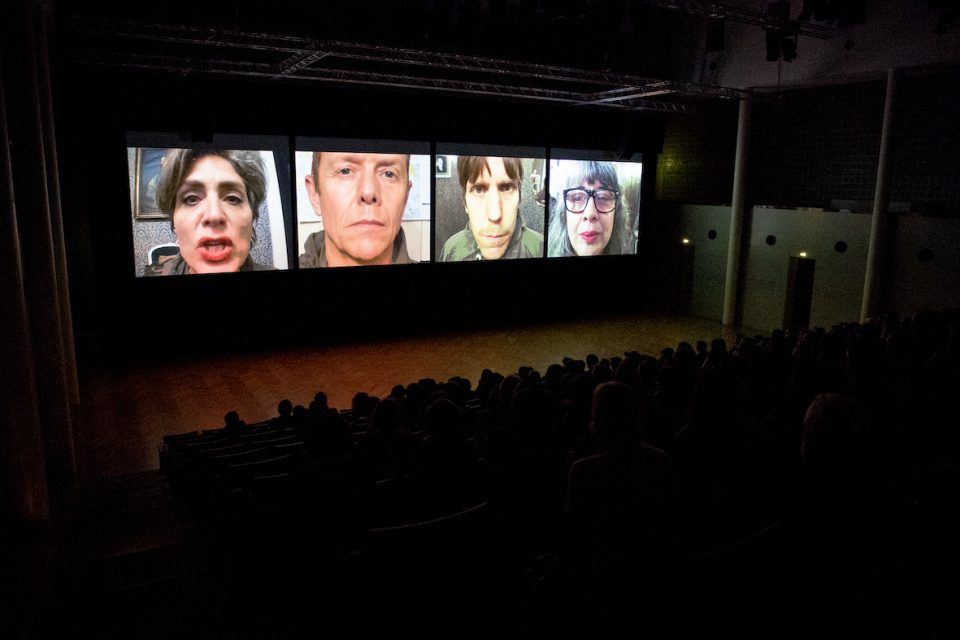 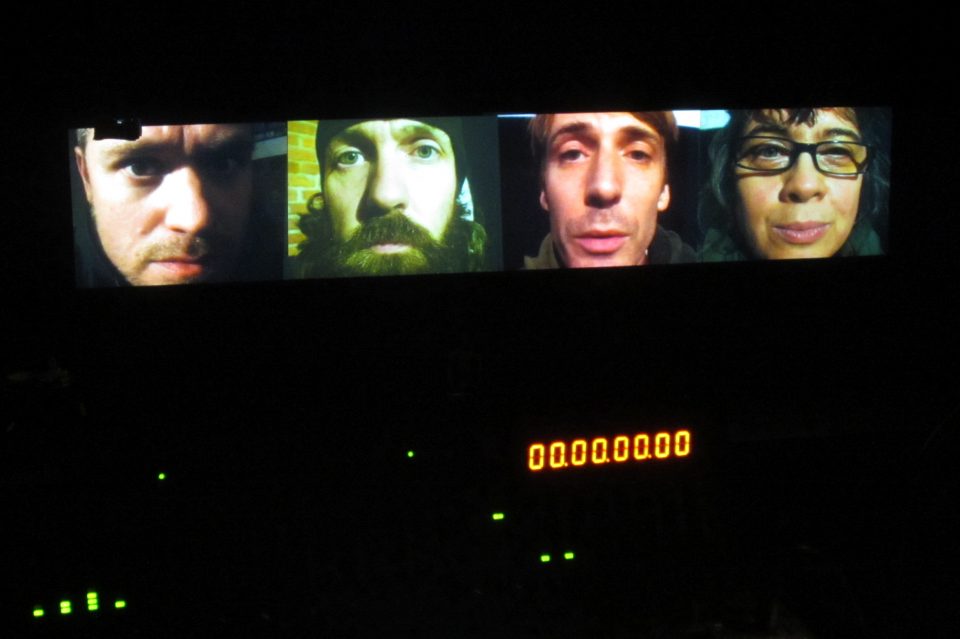 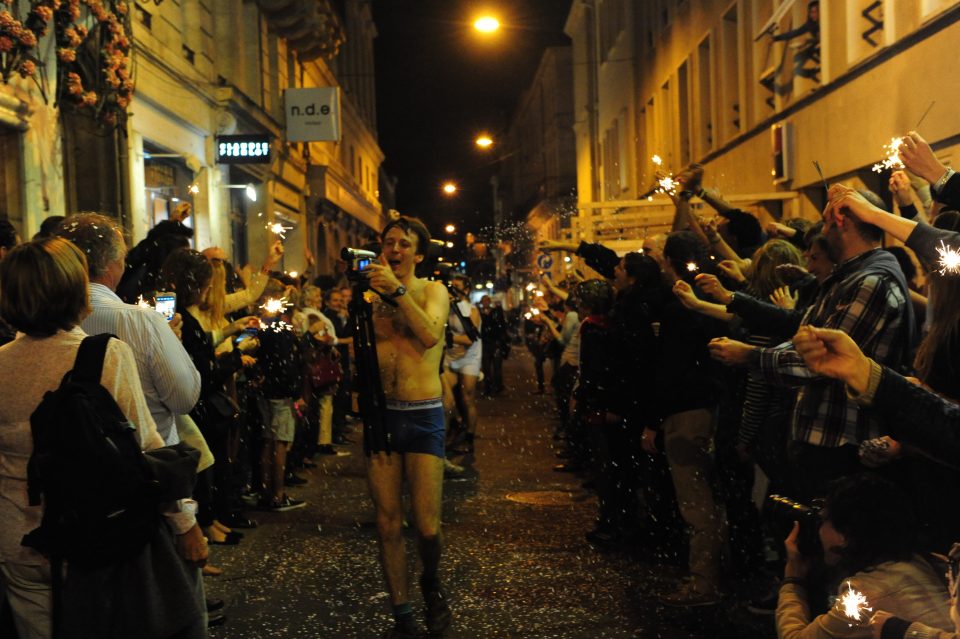 Super Night Shot is a magical journey through the night time streets of a not too distant city. Full of unexpected surprises, the public become co-stars in a movie that celebrates unplanned meetings with strangers and delights in the randomness of urban existence. Both comical and moving, Super Night Shot attempts to elevate the banality of everyday life into the glamour and glitz of a big screen blockbuster. It’s a completely unpredictable show that elevates the everyday into the epic and plays with your perceptions of the familiar. Anything can happen, and usually does…

The film begins exactly one hour before you come to watch it when the four performer/activists meet, arm themselves with their video cameras and start them simultaneously. With their watches synchronised, they state their manifesto with military precision:

“Each of us is just one in a million, easy to replace and easy to forget in a city that doesn’t really need us. But don’t worry. We’re going to change all that. We’ve got a plan. This city will need us and this film will be our witness.”

Embarking on a War On Anonymity, they set off into the night on an adventure where only one thing is certain: 60 minutes later they will meet again and present what they have filmed to the waiting audience. The city becomes a film set, a place where cigarette butts, graffiti, cars and buildings become props and facades and every passer-by is a potential extra, friend, lover or liberator. Working under the constraints of the time limit (the length of the DV tapes) the group set out to capture a great moment of emotion, passion and liberation on camera and bring it back to the waiting audience who themselves take part in the final scene, a heroes welcome. Once the tapes have rewound, performers and audience watch the results together. The sound is mixed live and scored with elements from film soundtracks. The result is an experience halfway between theatre and film that comments on our relationship to the urban environment. A movie that is both fantastical and documentary, that is at the same time a product and a process, both a “making of” and the thing itself.

Super Night Shot is Gob Squad’s most widely toured production, with nearly 200 unique presentations since the project’s inception in 2003, each one shot and screened only once in the host city. The piece has been performed in 4 languages on 6 continents and is still as fresh, dangerous and exciting as the day the 4 performer/activists first stepped onto the icy streets of Berlin in order wage their “War on Anonymity”.

Over the years, the film’s hero (a role rotated amongst Gob Squad’s performers) has done his/her best to solve all the problems thrown at them. In Siberia, the hero was asked to bring warmth to the city and melt the snow, in Brazil, the hero bridged the gap between rich and poor and helped raise money for a homeless woman to buy milk for her baby. In London, the hero gave some instant marriage guidance to quarrelling pensioners. In Bangalore, the hero provided security for a market trader and during a recent mission in the company’s home town of Berlin the hero helped some confused shoppers assemble their new Ikea shelves…

Super Night Shot has been performed in over 30 different countries on 4 continents. Soon the 200th show will be celebrated (watch this space). 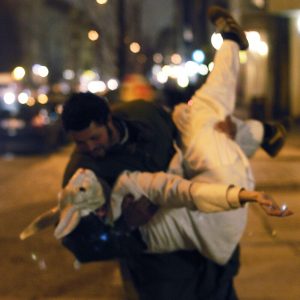 Performed by passers-bye and four of the above

Gob Squad work collectively, without a director, on the concept, design, devising and performing of their work. Permanent members of the group are Sean Patten, Berit Stumpf, Sarah Thom, Simon Will, Bastian Trost and Johanna Freiburg. Other artists are invited to collaborate on particular projects. For Super Night Shot, Gob Squad are joined by performance/video artist Elyce Semenec. The soundtrack was produced by sound designers Sebastian Bark and Jeff McGrory in collaboration with the company.

Commissioned by
Volksbühne am Rosa-Luxemburg-Platz Berlin.
With research and development funding from the Arts Council of England East Midlands.