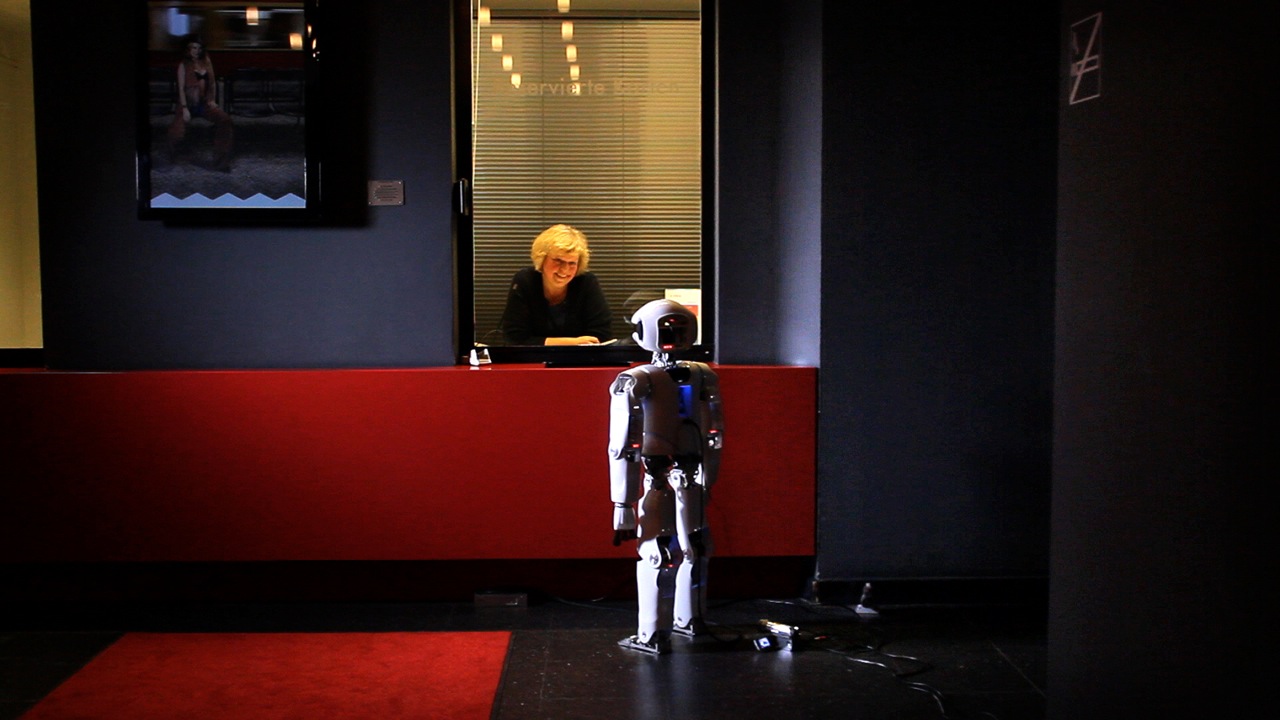 A lecture about our 2015 Robot vs. Opera project

My Square Lady, a robot-reality-opera, involving 150 musicians, singers, performers, technicians, scientists and a robot called Myon is too ambitious ever to be repeated, but Gob Squad members offer an illustrated talk about the project lasting 60-90mins

In the mid 1950s, the Broadway musical My Fair Lady became the longest running musical of its time. Based on the play Pygmalion by George Bernard Shaw, simple cockney flower girl Eliza Doolittle is plucked from the streets of London and trained by linguistics professor Henry Higgins under a bet that he can pass the commoner off as a lady of high society after 6 months of intensive tuition.

Almost 60 years later, Gob Squad dreamed up My Square Lady. There was no Eliza, but a robot called Myon (from the Neurorobotics Research Laboratory at Beuth University of Applied Sciences Berlin) which together with the staff and singers of Komische Oper Berlin, Gob Squad tried to pass off as a human, using all the means of the world of opera to teach it about the most human of qualities – emotions.  In the process of training Myon, all kinds of mind-bending questions concerning the nature of humanity emerged: what does it actually mean to be human? What are emotions and why do we need them? Does a robot need them, too? Why do we want to have artificial intelligence? Why do we want to have opera? Does Myon need a costume?

Holding the hands of Gob Squad, Myon passed through each department of the Komische Oper Berlin trying to understand and master the skills of musical craft and the art of emotion.  The road was long and perilous, there were successes and failures, joy and tears (not Myon’s), and only in the summer of 2015 was it clear whether the experiment came to anything when Myon starred in My Square Lady, the world’s first Reality Robot Opera.
The project saw an unlikely pairing between Gob Squad and one of Germany’s leading Opera Houses.  Both partners have radically different working and production methods and are structured in completely different ways. The partners used the encounter as an opportunity to turn “inside out” their usual means of production and investigate each other’s different working methods. Thrown into the mix was the Neurorobotics Research Laboratory at Beuth University of Applied Sciences Berlin and their research with modular robot Myon…
My Square Lady (the lecture) was first presented on 8th April 2017 at Creative Forum Festival in Tallinn, Estonia