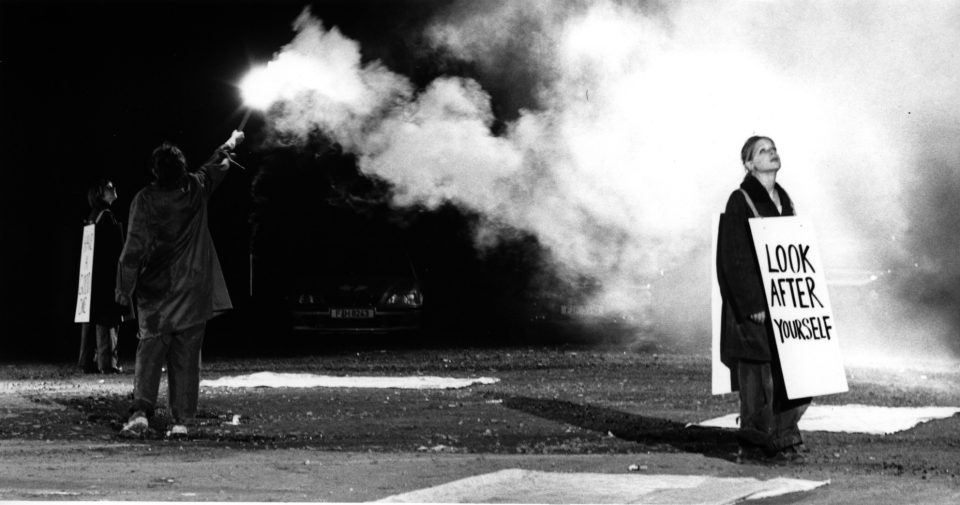 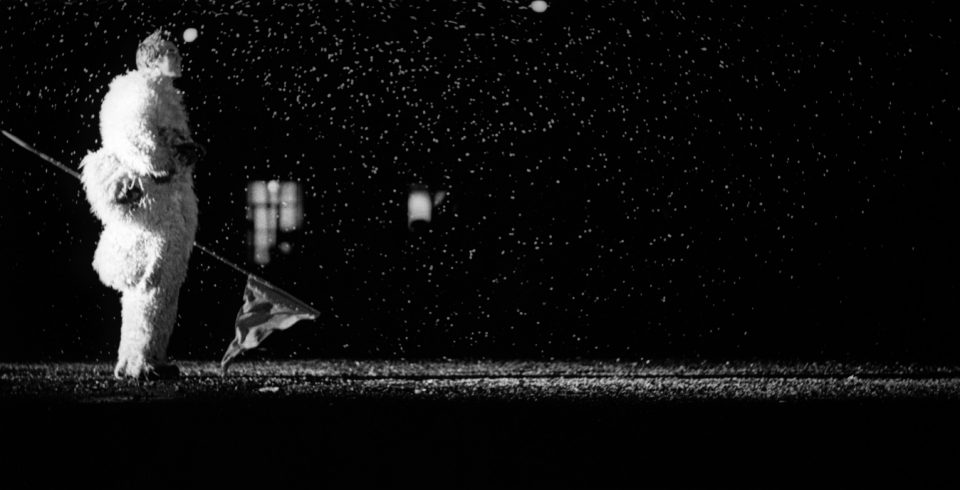 Here are 10 sounds that I am sending to you:

Watching from a circle of cars, the audience participate in a seance beneath the stars and listen to a soundtrack broadcast across the city to their car radios. “Sputnik 2 carried ‘Laika’, a lovely Russian dog who made her one way space voyage alone – the first dog in space, she never made it back alive.”

Where: a car park
(full of gravel and rubbish, the city skyline behind it, the open sky above)

Who: the male voice of a radio host; the female voice of a cosmic guide; 10 people in similar coats (falling over to the sound of gunshots again and again); a man in a polar bear costume, trying to plant a flag somewhere (holding the bear head under his arm like an astronauts helmet); 3 couples in ballroom gowns (waltzing in the cold); a woman holding a white balloon (refusing to let go of a lost lover); a woman driving a car (trapped in the circle, caught in the rain); a man doing a handbrake turn; a naked man being dumped from a driving car (with a plastic bag on his head and the word „heretic“ painted on his back); a stupid old man wearing an alien mask (trying to scare people)

What: 30 cars parked in a circle (audience sitting in them, watching through the windscreen); a radio station (broadcasting the soundtrack across town, car radios tuned in); a snow machine; a fork-lift truck; a strong water hose (to produce rain); dozens of aircraft landing lights, pyrotechnic effects, confetti bombs and fireworks (to send signals out into the night); strong searchlights (to chase people escaping from cars); sound samples from Spielberg movies; countdowns and recurring waltzes; adverts for missing people; several billboard signs (reminders to stay in touch)

Calling Laika takes place in a car park at night, beneath the stars. The audience walk through a carpet of blue light, to find their places in 1 of 30 cars , arranged in a circle as if in an automobile séance. The soundtrack encourages passengers to use their headlights and horns throughout and is transmitted through their car radios ( it can also be broadcast over existing radio frequencies). It’s dark, searchlights wander through the sky and the lonely voice of a radio DJ takes messages from missing people. This is a place for calling Laika, for calling anyone or anything. Calling Laika is about the basic need for human contact. The piece moves between the uncontrollable urge for a Spielbergesque spectacle and the simplicity of the message, to understand and to be understood.