Jeff McGrory: Fade down the Master 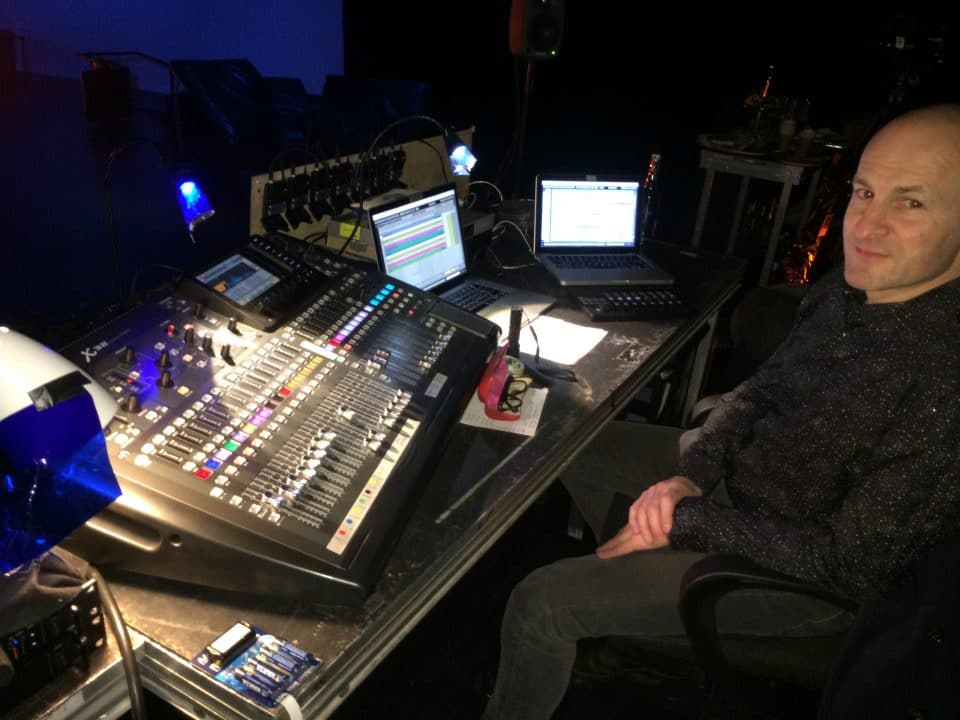 At the end of a year which has affected everyone, changed so much and brought struggles and impossibly shifting plans, we were very sad to lose a very close colleague and friend. Sound Designer Jeff McGrory, who has worked closely with Gob Squad for almost twenty years (as well as with plenty of other artists and film-makers) passed away on 29.12.2020 after two years of treatment for cancer.  It’s hard to describe the feelings of bereavement for someone who was part of your family and circle of friends, and especially someone who leaves the party early.  Anyone who met Jeff would confirm his impressive demeanour, his exceptionally polite manner, special turn of phrase, tone of voice and his humour which was full of bad jokes which fell lightly on everything, like the sparkle in his eyes.  Even in the past few months, he persistently reassured those around him that his medical treatment was bearable through his ability to endure and his gag-ridden temperament which was capable of throwing most hurdles off-kilter.

We wanted to acknowledge and remember Jeff’s exceptional talent in his work with Gob Squad, a collective which is the sum of its parts, some of which are often invisible because they are behind a tech desk at the back of the theatre, in dim working lights.  We first met Jeff in 2002 when we were working on our hotel-based performance Room Service (Help Me Make It Through The Night) and his name as a Sound Designer has been on almost every work which we have made since, often in collaboration with Sebastian Bark. In rehearsals, Jeff immediately connected to our world of play, with a willingness to throw things into the mix and to get insane over apparently irrelevant details. What became quickly apparent was that the process mattered to him as much as it mattered to us.

With ten fingers on the faders and often two computers running multiple tracks, Jeff leaned in to every performance and every rehearsal and contributed subtle, beautiful, bold yet sensitive soundscapes and music to many, many Gob Squad productions. He knew exactly when to fade a barely perceptible pulse or ethereal whisper into the mix, when to provoke a change of atmosphere with a blast of beats or opera, and when to play nothing at all, shifting focus to whatever was being said on stage. Improvising along with us performers, he knew how to play us like an instrument. And yes, he would’ve appreciated that innuendo. Always good humoured, always curious, Jeff loved to tour and loved to shape and sculpt live performance with his sonic powers.

We will miss him terribly.

Here are some memories from those who worked with him:

In the beginning of “Western Society” there is a composition by Jeff that invokes a history of life on planet earth culminating in.. well… Western Society. It’s an extraordinary montage of sounds that begins with calls and movements of animals and insects, the wind in the leaves and paws or claws treading in swamps or grasses or caves. Eventually there are drones as the construction of thousands of years speeds up (or slows down) via growls, grunts, screams, steps, wings, drums, flutes, swords, organs, hooves, bells, papers, alarms, guns, morse and other codes, saxophones, cannons, bombs, radios, crusades, imperialism, industrialisation, digitisation – it’s all there. It’s fragile and humorous and horrific and the sounds go past so quickly you can barely place them in time or space so that most of them become abstracted of meaning and signification – a kind of musique concrete comic-like construction of life on earth. From the first moment I heard it and imagined the time and care and precision it would have taken Jeff collecting and editing and mixing, finding and putting together all those little sounds in such a way that extends those minutes out into thousands of years. I imagined the listening and listening back and listening back and I immediately was a fan. I will miss Jeffs humour, his wit, his concentration and timing, his intelligence as well as of course his ears and that way his musical choices could make a banal scene in an empty room feel like heaven.  And I will really miss having a beer with him after.
Damian Rebgetz

Getting Ready for the Kitchen with Tell us a Story, Jeff McGrory
We performed Kitchen what feels like hundreds of times in many places around the world.  Before the audience came in we would always ask Jeff to “hit us” with some random dance track so we could have a warm up dance before we let the audience in, and Jeff always had a surprise set of tracks up his sleeve for us performers to prance around to and psyche up to.  Jeff had a mild smile on his face as he jumped from one track to the next.
Once we got the cue that the audience were coming in,  Jeff would switch to one of his classic soundscapes that he had specially prepared to welcome our audience, a magical, ambient and trance like mash up of tracks which absolutely referenced the content of the Warhol based show we were performing.  Segments of Maria Callas (which Warhol constantly played in the factory) together with samples of a cover version of Velvet Undergrounds “All Tomorrow Parties” by 80s band Japan (who Jeff was a big fan of) had been lovingly threaded together.  The track would often play for a good 10 minutes and had a sense of constant impossible elevation and suspense,  every time i hear it i am transported  to the exquisite anticipation of performing the show.
Jeff then soundtracked the show in the same improvised manner in which it was performed, never playing set fixed tracks but rather placing ambient layers, loops  and sound effects that could make a silence feel extra silent and a choreographic moment feel extra juicy.  Jeff worked with the performers in his choice of timing and content,  the detail of his work was amazing and constant in its revision.
Jeff, your soundtrack was absolutely a co-writer and performer of Kitchen.  Your talent will really be missed, along with your cool headed quips and your gentlemanly style.  Miss you much.
Simon Will

Dear Jeff,
we were newcomers to Gob Squad – that was in 2002/2003 with “Room Service – Help Me Make It Through The Night” – I just became aware of that again.Since then, I have been able to get to know you and your many, ever-surprising facets and abilities.Every time we saw each other and spoke, I learned something new from you. You told me about thoughts, books, music and films and series that I didn’t know and I admit it: you probably used these references a lot in Gob Squad and other pieces without me noticing… 😉

You had a curiosity and openness towards everyone you met. In my perception there was no “right or wrong” for you and I think that’s great. You tried to understand before you made yourself understood and at the same time your handwriting was so clear and elaborate. Unmistakable. You always asked how things were going, how the children were, how life was going in general – even when the cancer was already getting to you. It was the same the last time I met you. I will always carry this human warmth and affection and above all this unbeatable humour in my heart as a memory – when I think of it, I have to laugh directly.

I can’t promise you that I will still read Heidegger’s “Being and Time”, but I take you with me as a voice in my ear that keeps me open to a world that can make good use of this openness, tolerance, laughter and understanding connecting tones. If I ever feel down and will lose faith into the world, if I’ll need “help to make it through”, I’ll put on the McGrory record. Thank you for that, Jeff! I will miss you dearly.
Eva Hartmann