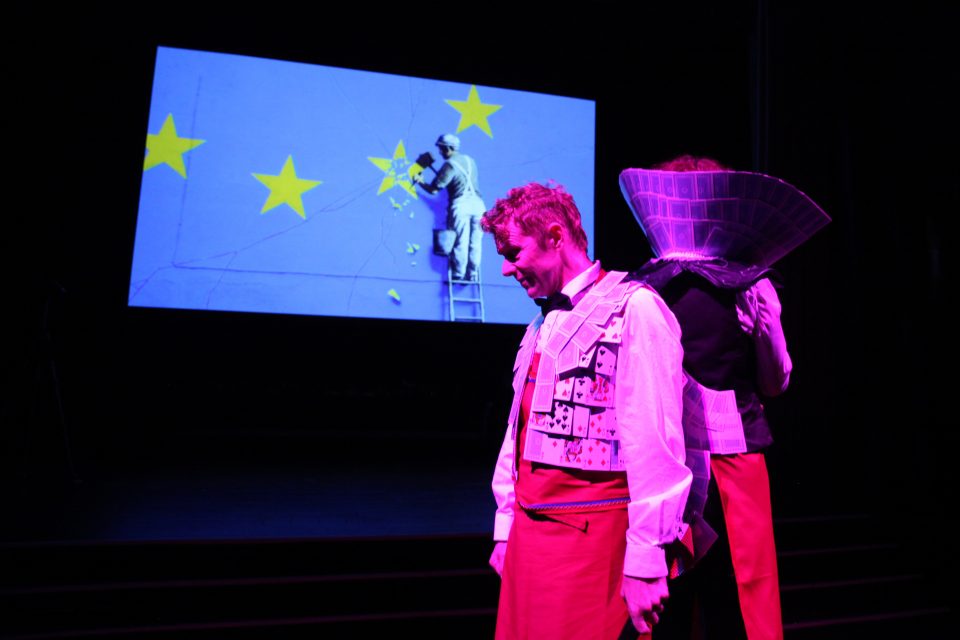 Our New Year’s message:
Are you sick of that two-syllable word? The one that starts with a B and ends with a T? We are, and apparently so are millions of British voters. And yet, we’ve found something strangely inspirational in what we generally feel to be a tragic mistake.

The phones at our Berlin office were ringing more than usual in the run-up to Christmas. We’ve been called on by the German media to explain why the British have voted so emphatically for Boris Johnson and Brexit. “Please, Gob Squad, with your uniquely bi-national background, tell us why the Brits are turning their backs on their Anglophile friends across the water. Can you do an interview this evening? On live radio?”

How could you say “ich liebe dich” when you never actually understood my culture?

We try to avoid simplistic explanations. Back in March, the original Brexit deadline, we made a six hour performance/happening together with HAU Hebbel am Ufer to try and process our own thoughts and emotions. On the face of it, I Love You, Goodbye is House of Commons vs. TV cookery show, with plenty of music and dance to break up the evening. At its heart is the idea that if we are splitting up, then maybe it’s about time we looked our cultural differences in the eye and made one last attempt to understand each other. Identity, belonging, home, tradition, class all get sliced and diced by a ruthless Mr or Madam Speaker, whilst chickens are poached, herbs are chopped and vegan alternatives are tried and tested.

Der Spiegel refused to review it (“it’s a cookery evening, not a theatrical production”) whereas Ex Berliner magazine selected it as one of the top performances of the year. Can they both be right? Later this month, on the day of the final Brexit deadline, 31st Jan 2020, HAU Hebbel am Ufer is presenting I Love You, Goodbye (The Brexit and Beyond Edition). Join us, for an emotional, and potentially mouth-watering evening. Tickets here.

Dance the shame away

The first performances of the New Year are Dancing About at HAU Hebbel am Ufer on 7th and 8th Jan, where we turn stories of shame into improvised dances before the watchful eyes of a real, live praying mantis. Then we’re off to Porto on 17-18 Jan, reenacting the least-watched video on the internet in Western Society at Teatro Nacional Sao Joao.

Later in the year we’ll be developing a new project to be premiered in June, we’ll be busy with teaching and mentoring and we hope very much to tour a range of projects in the UK. After the endless debates and arguments, our response to Brexit is to swim harder than ever against the tide of separation and engage with audiences and artists in the UK in whichever way we can.

Best wishes to all of you from all of us at Gob Squad. Here’s hoping that whatever storms the coming year and decade has in store, we can all weather them together.

P.S. If you’ve read this far, you will realise that you have arrived at the all-new Gob Squad website, designed by Bananenbiegerei with illustrations by Andree Volkmann. We hope you like it.